A great leader of the American Civil Rights and Labor Movements, Asa Philip Randolph died on May 16, 1979 in New York City.  He was born on April 15, 1889 in Crescent City, Florida. The first primarily African American Labor Union; the Brotherhood of Sleeping Car Porters was organized by Randolph.

In 1925, he organized and led the Brotherhood of Sleeping Car Porters, the first predominantly African-American labor union. In the early Civil Rights Movement and the Labor Movement, Randolph was a voice that would not be silenced. His continuous agitation with the support of fellow labor rights activists against unfair labor practices in relation to people of color eventually led President Franklin D. Roosevelt to issue Executive Order 8802 in 1941, banning discrimination in the defense industries during World War II. The group then successfully pressured President Harry S. Truman to issue Executive Order 9981 in 1948, ending segregation in the armed services.

In 1963, Randolph was the head of the March on Washington, which was organized by Bayard Rustin, at which Reverend Martin Luther King, Jr. delivered his “I Have A Dream” speech. Randolph inspired the “Freedom Budget”, sometimes called the “Randolph Freedom budget”, which aimed to deal with the economic problems facing the black community, it was published by the Randolph Institute in January 1967 as “A Freedom Budget for All Americans“.[2] 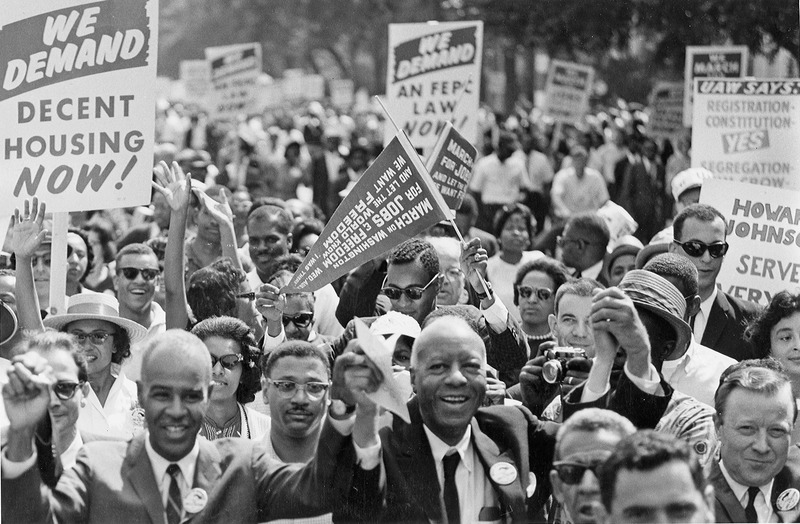 Roy Wilkins, A. Philip Randolph and Walter B. Reuther Lead Marchers During The March On Washington