Henrietta Lacks was born as Loretta Pleasant on August 1, 1920, in Roanoke, Virginia.  One of ten children, she and her siblings were dispersed to different households upon the death of her mother. Her father was unable to care for all of his children.

Lacks ended up in Clover, Virginia. She was left to be raised by her grandfather on the plantation owned by her white great-grandfather and great uncle. She shared a room with her cousin, David “Day” Lacks who would become her husband in the future. 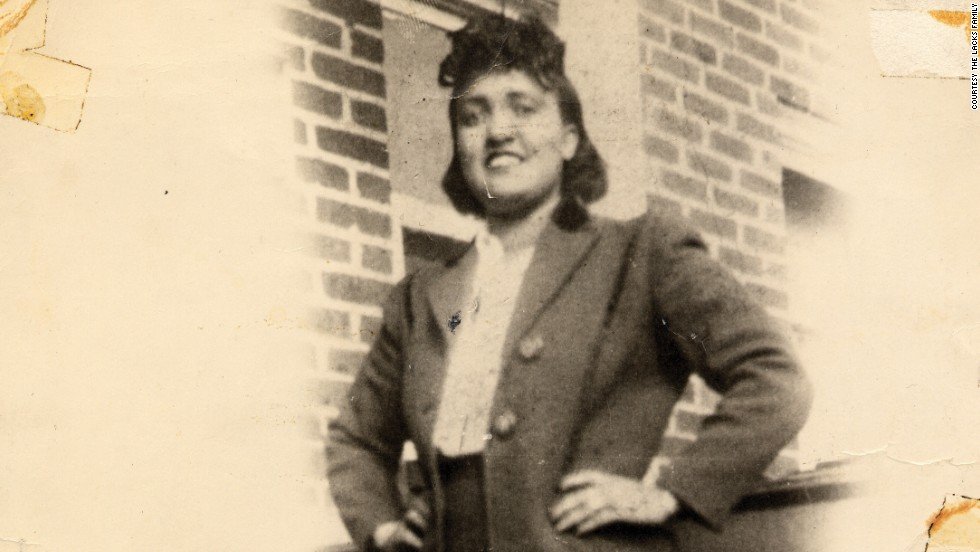 Lacks became a tobacco farmer. In 1935 at the age of 14, Lacks gave birth to her first child, Lawrence Lacks. In 1939, she and David welcomed their second child, Elsie Lacks.  Elsie was born with developmental difficulties. She was later committed to the now Crownsville Hospital Center, formerly known as the Hospital for the Negro Insane. Elsie died in 1955.

On April 10, 1941, David and Henrietta married in Halifax County, Virginia.  Convinced to move, the couple then relocated to Maryland.  Several years later, David was given some money from his cousin, Fred Garrett who was recruited to fight in World War II.  The Lack’s purchased their first home in Turner Station. Now a portion of Dundalk, it was one of the first and largest African-American communities in Baltimore County at that point in time.

The Lacks went on to have three more children. After giving birth to her last child, Henrietta was diagnosed with cervical cancer.

On January 29, 1951, Lack felt abdominal discomfort in her womb and sought treatment at John Hopkins hospital.  Suffering a hemorrhage, she was tested for the sexually transmitted infection, syphilis.  The results returned negative.  Her doctor, Howard W. Jones biopsied the mass on Lack’s cervix.  It was determined that she had a malignant epidermoid carcinoma.

Lacks was treated using radium tube inserts.  She was charged with returning back to the hospital for X-ray follow-up treatments.  Unbeknown to Lacks and without her consent, samples were taken from her cervix. The samples were given to George Otto Gey, a cancer researcher and doctor at John Hopkins.   One sample was non-cancerous while the other was cancerous.

The cells extracted from Lack’s cervix later became known as the HeLa immortal cell line; a widely used cell line. The HeLa line is commonly used in scientific research. What is also remarkable about HeLa is that the cells can be used time and time again. Even if the cells are no longer “alive,” a fresh batch can be taken from the original culture of cells.

On August 8, 1951, Lacks complained of severe abdominal pain. She was given several blood transfusions and stayed at John Hopkins until her death on October 4, 1951. A partial biopsy revealed that the cancer she was suffering from had spread throughout her whole body. She died at the age of 31.

Lacks was buried in an unmarked plot of land in the family cemetery, in Lackstown in Halifax County, Virginia.

In 1952, a vaccination for Polio was developed using the HeLa cells.  In 1953, the cells were the first to be successfully cloned.  In addition, the cells have been used in gene mapping and further research for various illnesses.  There are currently 11,000 patents held for the HeLa cells.

In 1970, it was discovered that Lacks suffered from adenocarcinoma and not epidermoid carcinoma as originally thought. It was also during this time that family members learned that a significant portion of HeLa cells became contaminated.  Family members were asked for blood samples from researchers. This caused grave concern and peaked the descendant’s curiosity about the bloodline of the Lack family.

In 2010, a faculty member of the Morehouse School of Medicine who knew members of the Lacks family and who had also worked with Gey donated a headstone for Henrietta.  It includes an inscription written by her grandchildren.

In 2013, researcher’s revealed the DNA sequence of the genome of the HeLa cells. In the same year, individuals from the National Institutes of Health (NIH) working with a different portion of the HeLa Genome submitted it for release as well.

In 2013 there was an agreement settled which gave the remaining members of the Lack family control over how the sequence is publicized. The family will also receive recognition in scientific papers. In addition, two family members will be part of the board which decides how the access to the sequence will occur.

The descendants of Lacks were informed of the initial publishing of the HeLa cells via science writer, Rebecca Skloot. Skloot authored the book, The Immortal Life of Henrietta Lacks. It became a bestseller and was eventually made into a film.

In 2017, The HeLa Project, a digital exhibition was opened in Baltimore at the Reginald F. Lewis Museum of Maryland African American History & Culture.