Liverpool star Mohamed Salah has become the first player to be named Premier League Player of the Month on three occasions in the same season.

In what has already been a remarkable campaign for the Egypt international, he has now made more English top-flight history.

His goal haul across all competitions has been taken to 39, with 29 of those efforts coming in the league.

Salah found the target six times in four Premier League outings throughout March, with the month opened by helping to down Newcastle 2-0 at Anfield.

A rare blank was drawn in a 2-1 defeat to Manchester United, but the 25-year-old made amends for that disappointment in some style.

He hit four of Liverpool’s goals in a 5-0 drubbing of Watford, before snatching a dramatic 84th-minute winner at Selhurst Park as Crystal Palace were edged out 2-1.

That contribution has seen him picked out as the cream of the Premier league crop, adding to the honours he has already collected in November and February.

Salah told the Premier League’s official website on his history-making achievement: “I feel good to win it again, we had good results in the month so that’s the most important thing.” 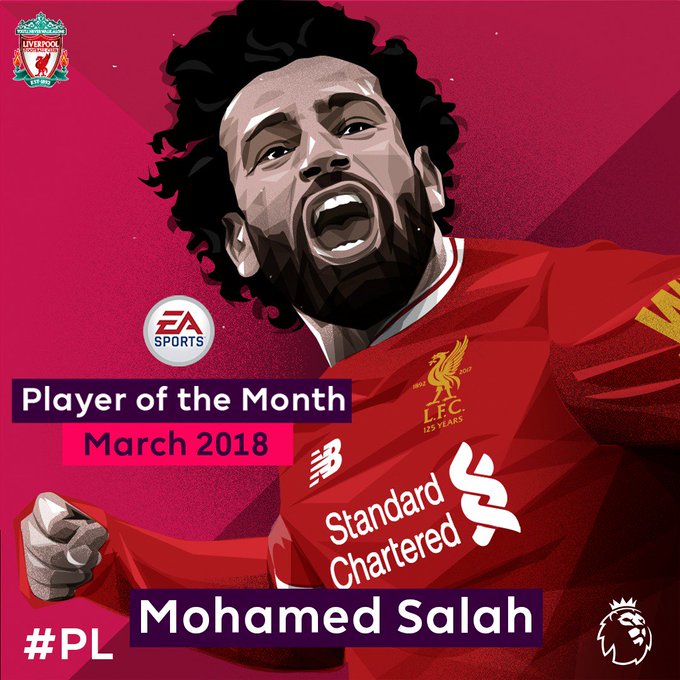 It could be that there are more honours to come for Salah before the season is out, with his sights being set on another record.

At present, the best goal return across a single 38-game Premier League season stands at 31 – with Alan Shearer, Cristiano Ronaldo and Luis Suarez having all achieved that feat.

Salah has that tally within reach, with Liverpool still having five fixtures to come in their ongoing efforts to wrap up a top-four finish.

Salah added: “I’m very proud to see myself fighting to break the record for the Premier League. I’m thinking about each game. That’s my target, I want to score, I want to help the team to win again.

Elsewhere, Burnley boss Sean Dyche has seen his own stunning efforts in the Premier League recognised with the Manager of the Month award for March.

The Clarets collected nine points from three outings against Everton, West Ham and West Brom last month to cement a standing in seventh spot and remain in the hunt for European qualification.